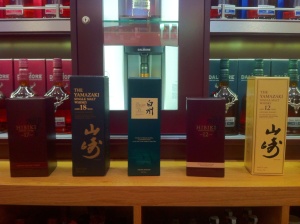 Tonight, we take our taste buds to Japan where we have the luxury of trying some of Japan’s finest whisky; the Yamazaki, Hakushu and Hibiki. All three distilleries are owned by Suntory who owns Morrison Bowmore as well. Now, Japan isn’t a new player in the whisky industry, in fact they have been making whisky before WWII, the exact year 1923 and Shinjiro Torii, the father of Japanese whisky imported the entire distillation process from Scotland. Today the whisky is exported to over 25 countries and the distillery has won numerous top awards. The brand ambassador for the evening, Tatsuya Minagawa says the distillery have a mantra which they recite dearly when making whisky; “subtle, refined and complex” and when you’re tasting, you’ll understand why.

Before we get on with the whisky, I’ve learnt an interesting fact about the wood maturation process. Scottish weather is ideal for whisky making due to extreme low temperature achievable in the region which allows the wood contract and expand, imparting the whisky flavours to the spirit. But the weather in Yamazaki distillery can be quite hot in the summer and relatively milder in the winter can cause the whisky to mature quickly. To work around this, Japanese whisky is matured in a wide variety of barrel sizes, bourbon, hogshead and the 480 litter puncheon. The large puncheon barrel reduces the surface area contact of the whisky and wood and the result is a slower maturation process.

The Yamazaki makes three flagship whiskies, the 10yo, 12yo and 18yo. The 10yo has now been discontinued, so tonight we tasted the 12yo and 18yo. My first attempt at the 12yo was 4 years ago where I was blown by how “subtle” and “refined” the whisky was. Today, trying the 12yo takes me back to the same place I was 4 years ago, the day I shared Japanese whisky with my father at my brother’s wedding. The 12yo is matured, with both American and European oak, but with a little bit of Japanese mizunara oak. Mizunara oak, the magic ingredient in Japanese whisky was used more widely during the Second World War onwards when American and European oak became difficult to source. It is said that originally Mizunara wasn’t the best wood since it’s more porous and prone to leakages. However, long maturation in Mizunara oak imparted a very distinct flavour into the whisky and is now a well-known characteristic unique only in Japanese whisky.

The 12yo aroma is very fruity revealing vanilla, honey, banana, mango and pineapples. The palate is fruity and tingle the tongue just a little. The finish is nutmeg and cinnamon like and then there is the mizunara effect. At the sides of the tongue and at the lower back, you get this mild numbly bitterness in the finish. The subtle bitterness is nothing like some of the sherry mature/finish whisky. Best way to describe this, remember the time when you accidentally bit your tongue, it hurts terribly first but over time; you get that residual numbing painless sensation. This numbing sensation stays with you a little while. The 18yo adds more “complex” depth to the 12yo. Similar wood is used as the 12yo, but the aroma and palate is a lot deeper. I picked up more of the European oak and sherry influence coming out. The aroma has apples, rich fruitcake, mild lemons, raisins, sultanas, figs and hint of Marmite. The palate is fruity with dark chocolate, spicy, sandalwood, and toffee. The finish is similar affect to the 12yo but much much longer and deeper. The mizunara wood effect is more prominent combined with incense aroma.

whiskytale: The 12yo whisky is the whisky “show girl” you bring out to entertain your friends and family. After your guests have left, just before you retire for the night, you open your cabinet and have a one final dram with the Yamazaki 18yo. She is your “sophisticated mistress”, no one knows about her, and she only comes out when you desire. She knows she’s cherished and best for last because she leaves a lasting impression.

The Hakushu 12yo is a mildly peated whisky, more subtle than most of its Scottish counterparts. The distillery is located 700 meters above sea level and hence only uses bourbon and hogshead and no puncheon cask for maturation. The whisky is matured in mostly American oak and less European oak. Instead of using peated barley of certain ppm strength, the distillery blends whisky with heavily and lightly peated barley to create the required balance. The aroma is nutty like pistachio, vanilla and the sense of light smokiness is present. The palate is vanilla, lightly minty and dry whilst the finish is tingly, peaty and soft-bitterness. If you aren’t sure about what peaty whisky taste like, you may missed the fact that you just had the Hakushu 12yo. It’s a very reserved whisky.

whiskytale: The Hakushu 12yo dresses like all the other peated whisky to be noticed, but she plays alone in the park. Whilst the other kids are screaming and running around, she is sitting in the corner reading a book. The others acknowledges her presence and accepts her as playmate but she just smiles and carries on in her own space. That’s the Hakushu 12yo for you. The Hakushu 12yo will make an impression if and only you pay enough attention to her. And she will come to play with the other kids as long as you’re willing to accept that she is not burly like the rest.

Finally we step out of the single malt and taste their blended single malt, Hibiki 12yo and 17yo.The 17yo blend uses almost equal shares of grain and malt barley whereas the 12yo has more grain to malted barley. Tatsuya says the blend is a combination of 30 different styles but the 12yo, considered the adopted child of the Hibiki blends (available since 2009), have no mizunara oak maturation. The 12yo aroma is pineapple, honey whereas the 17yo is fruitier with green apples and pineapples. The 12yo palate is mildly salty, has tropical fruit and lemons whereas the 17yo similar with more sherry influence present. Both whiskies have ever so light smoky and earthy finish. The hibiki blend is different compared to the Scottish. You get more vanilla and honey in the Scottish blend usually but less overwhelmed in the Hibiki. The smokiness is elegant although I prefer the 17yo more than 12yo as it’s got more depth.

whiskytale: The Hibiki are the new family from a foreign land that just moved into your friendly blended neighbourhood. Everyone is a little reserved at first but they adapt really well with the locals and they do not shy from their own culture too. In fact, if you spend enough time with them, they will teach new tricks you never knew.